Feel The Fear and Do It Anyway – My yogic journey 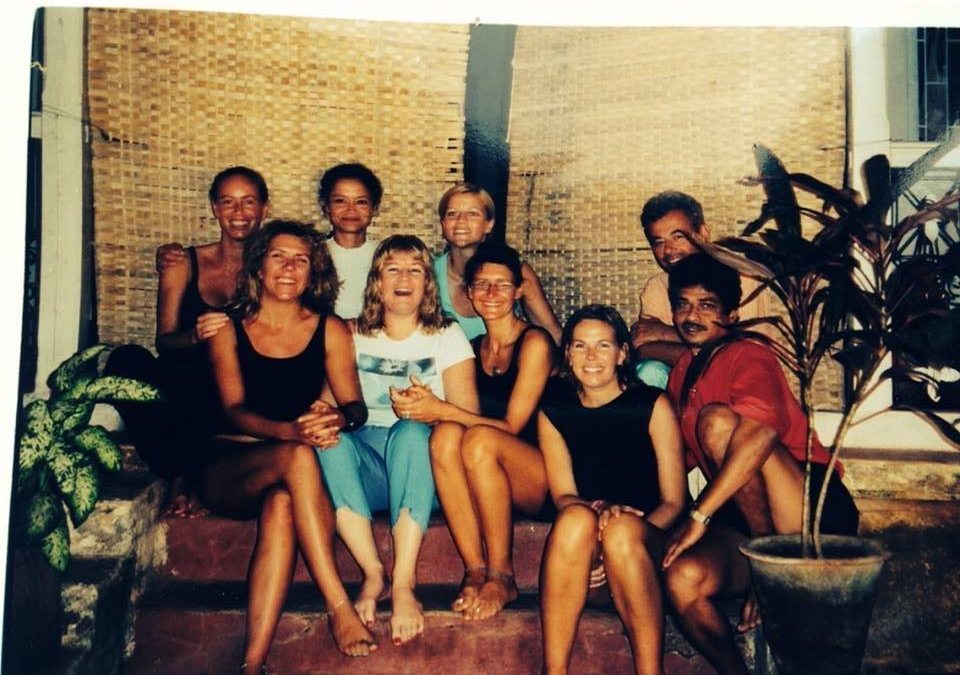 Over the past few weeks a few people have asked how and why I chose to become a yoga teacher and what I like about my job, so for those that may be interested…
My mother originally encouraged me to join her class when I was 18 years old. All I could think was ‘green leotards’ but with no enjoyment from the usual ‘feel the burn’ aerobic classes, I had little to lose. The yoga classes were taught by a gentleman (no leotard) and although I didn’t understand the unpronounceable names, it didn’t matter. The classes were a breath of fresh air, I immediately resonated with them, rushed out to buy a copy of ‘Light on Yoga’ and continued to attend as many classes whenever I could. This sometimes proved challenging due to a busy marketing job in central London. By my mid-thirties, and pretty much burnt out, I found myself looking for ‘something else’.
During a two week, much needed break in India, I met three Aberdonian fishermen. Fitting the stereotype completely, (except one was a Reiki Master!) this coincidental friendship was the beginning of my future. I instinctively knew the minute they handed me a leaflet about intensive yoga teacher trainings in Goa that this was what I had been searching for.
Immediately, everything began to fall into place. I gave up my much-coveted, fast-paced job, packed up my flat and my life and started learning Sanskrit (the ancient Indian language no longer spoken in modern day). During the next few months my morning commute, crammed on the Bakerloo line, I swapped the morning paper for books and attempted to get to grips with this huge subject called Yoga.
With most of my possessions given away and the rest stuffed into a small attic (except for my beloved vinyl collection and gold VW Beetle), I said my goodbyes. Nine months after that fateful meeting, I boarded a flight back. Held tightly in my hand, an envelope from my grandmother, to open once airborne. Inside was some money (which she could hardly afford) towards my first training and wonderfully supportive words to encourage me on my journey. I pinched myself in dissbelief, completely unaware of exactly what lay in store and nervously landed back in Goa to embark on a life-changing experience and very steep-learning curve.
Although I was reasonably fit, my body did not know what had hit it. Excruciatingly long, physically, mentally and demanding days were topped with stubborn hamstrings that did not want to stretch and a back that did not want to bend. This left me wondering what I had done with my perfectly OK life in London and I frequently thought about running back to familiar territory! Slowly but surely the body began to open, the mind began to absorb and my morning commute was on a little moped, driving through rice paddy fields, past locals tending their crops. Cows grazed anywhere and everywhere, monkeys swung through trees and life gently meandered under the Indian sun. Despite the hard work, I was living the dream.
That summer was spent teaching and waitressing in Spain before returning to India for more… another six months, another higher level of teacher-training and valuable experience teaching at the yoga school.
Back in London after 18 months abroad, I had to make a living… It was a tough transition from an idyllic life to having to pay the mortgage! I would take any classes that were offered; from the 7am’s in East London to the 9pm’s ‘up West’. I did holiday cover, maternity cover, sickness cover and last minute, no-show-teacher cover! It was exhausting but necessary. Eventually, I was teaching locally, full-time and utilising my spare bedroom as a small yoga studio.
If that wasn’t enough, I also enrolled in another (three year) Internationally recognised Iyengar(R) yoga teacher training, as I felt that I had only just scratched the surface of this extraordinary subject which many say is over 5,000 years old.
Twenty years later, along a road more travelled than less, I am still treading the yogic path. A few years ago, I left the big smoke and returned to my home county, Kent. Having re-located to peaceful Hythe, on the Kent coast, I am again building up local classes, meeting new students, running workshops and yoga holidays in Portugal and Spain and I hope, one day, to run a ‘Yoga B&B by the Sea’.
Although not under the Goan sunshine, I have a lovely beach not far from my house and my morning commute could not be more different from the Bakerloo line; it’s just a short, unhurried drive along the seafront or through beautiful Kent countryside.
I feel blessed to have this fascinating subject in my daily life; I receive so much satisfaction from my personal practice and teaching, I don’t think I will ever do anything else. I love seeing how yoga helps people, not just their hips, knees, back etc. but how some people introduce other changes into their life which improves their emotional and physical well-being. It touches people in many different ways. I always say that you can’t fast-track yoga; you get out what you put in. But just allowing yourself the space to give back to yourself, it often helps you to find more strength to give to others.
Don’t get me wrong, as anyone who is self-employed will know, it’s not just about doing what you love, there’s also constant admin, marketing, promotion and and finances to balance. But, I truly believe in the power of yoga and will continue, through all life’s highs and especially the lows, to teach and pass on this incredible subject and when my canine friend eventually arrives, we can practice our ‘up-dogs’ and ‘down-dogs’ together. Maybe I’ll learn doggy-yoga or if that’s just a little bit too barking, I shall start my own range of green leotards.
“Words cannot convey the value of yoga – it has to be experienced” BKS Iyengar